A gravestone is a stone that is usually circular, or rectangle like shape that you place on top of a grave. American gravestones are made from granite, marble, limestone, sandstone, slate, quartzite, schist, or wood. It has engraved on it the deceased’s name date of birth and date of death. Some may also include a picture of the deceased or some kind of artwork. There are also some gravestones that have sayings on them which are called “epitaphs“. At first these “epitaphs” were warning like, or hints as to why the person died or who may have caused the death. Over the years these “epitaphs” were more for amusement and had to do more with deceased sense of humor. If you see a WOW gravestone, you are looking at the gravestone of a former member of the Woodmen of the World which was an American Fraternal Insurance Company that gave $100 and a free gravestone to the surviving family members if their logo was on that gravestone. Their emblem is a sawed-off tree stump. Lambs are usually found on children’s gravestones. These are just a few examples of what some gravestones look like and how some actually have a meaning or story behind them.

Other names for gravestones are tombstone, stone, monument. These are usually used by Christians, Muslim’s, Jewish, and Catholic to name a few. Gravestones have been around for many years. It is said that originally their purpose was to keep the dead from rising. Even though that may not be the purpose for them anymore, it’s a tradition that will most likely stick around.

Gravestone prices can range anywhere from $100 being the least expensive, to $1,000 being average , and then $3,000+. There really is no limit. You can have as much or as little on a gravestone. 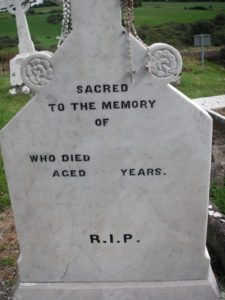